Dashboard provides the ability to host a sign-on splash page that can use one or more external RADIUS servers for authenticating users. This document describes the details of how and when those RADIUS servers will be contacted for authentication, and how the Dashboard will behave if it is unable to contact any of the configured servers.

For the purposes of this document, let's assume that you have configured three RADIUS servers for authentication and that they have the hostnames radius1.example.com, radius2.example.com, and radius3.example.com, in that order. We will refer to them as servers 1, 2 and 3 respectively in the following examples.

The "Load balancing policy" setting in Dashboard determines which RADIUS server will be contacted first in an authentication attempt, and thus the ordering of any necessary retry attempts.

This can be found via Wireless > Configure > Access Control > RADIUS when Sign-on with my RADIUS server is selected under the Splash page section. There are two options, Strict priority order (default) and Round robin: 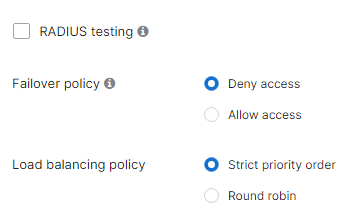 The server chosen first will be rotated based on which was used last. So on the first auth request from a client, the order for contacting servers will be 1,2,3 (i.e. same as the "strict priority" setting). On the next auth request however, the ordering will be 2,3,1, then 3,1,2, and then 1,2,3 again. The purpose of this setting is to have all of the configured servers receive roughly the same number of requests on average so that no single server has to handle all of the request traffic.

In the event that a RADIUS server is not reachable, the Dashboard will attempt to contact each server up to three times (one initial request plus two retries).

In the example above, behavior will differ based on the load balancing policy:

If no valid reply is received from any of the servers after all the retries, then the request will be handled according to the Failover policy setting (see below).

Error packets are generally ICMP "Destination Unreachable" packets that indicate either the connection was refused (e.g. no program is listening on the specified UDP port on the destination machine) or the host itself is unreachable (e.g. invalid IP address). If such a packet is received then the next server on the list is tried immediately since the Dashboard knows that it will not receive a reply packet from that server.

The packet timeout is needed because RADIUS servers that are overloaded, or that are behind a firewall that drops incoming request packets, may not send any error packets in response to authentication requests.

The Failover policy setting in Dashboard determines how authentication requests should be handled in the event that all of the configured RADIUS servers are unreachable.

If the policy is "deny", then no new users will be allowed on to the network until one or more RADIUS servers is available again. (Users with existing sessions can still use the network until their session ends.) This is the default setting.

If the policy is "allow", then users will be granted a special 1 hour session on the network if no RADIUS servers can be reached.

Failover policy is only available on configurations using Splash Page with RADIUS.