MAC randomization has become much more prevalent in enterprise networks. With newer mobile devices like Apple or Android smartphones, this feature is usually enabled by default. This document will cover some of the current MAC randomization feature that are available and how these features effect Cisco Meraki devices/features.

Apple released iOS 14 on September 16, 2020, which included some changes to how MAC addresses are handled on iOS devices. iOS 14 introduced the MAC randomization feature which means that for each SSID, devices running iOS 14 will present a distinct randomized MAC address. This randomized MAC address for each network will not change over time, upon reconnecting to the same SSID, or when the SSID is “forgotten” in the device settings and re-joined later on. Also, toggling ‘Private Address’ on and off on an iOS 14 device will switch between the real MAC and the randomized MAC for that Wi-Fi network, but that the randomized MAC won’t change as a result of the toggle either. If a MAC address second character is a 2, 6, A, or E, then it is a randomized address.

If an Apple user upgrades to iOS 14 and visits your location, their device will connect to the network with a randomized MAC address. This MAC address is different from the device MAC address, is SSID specific, and will remain the same for a given SSID. Apple has, however, stated the possibility of implementing rotation of MAC addresses within a single SSID in the future.

This change from Apple is expected to impact several Wi-Fi features and services across various products in the industry. This is also expected to increase the load on the network and cause anomalies. Meraki will be tracking the impact of this closely and taking proactive steps.

Similar to iOS devices, the MAC randomization feature on Android devices allows for the use of randomized MAC addresses when connecting to a Wi-Fi network. On Android 10+ devices, MAC randomization is enabled by default, and can be enabled/disabled by going to the network details section of the settings page: 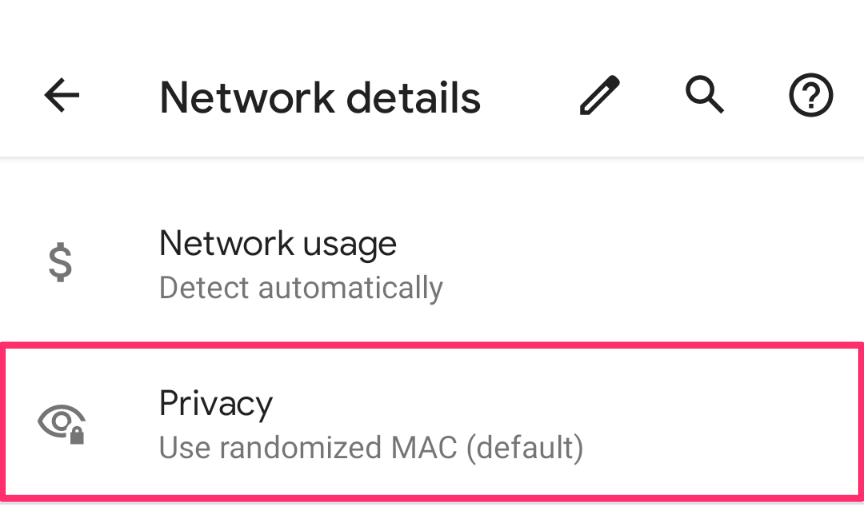 This MAC address will remain the same until a factory reset of the device. The MAC address does not get re-randomized if the user forgets and re-adds the Wi-Fi network since the MAC addressed depends on the parameters of the network profile.

For Android 10 and 11 devices, the persistent randomization framework is used for all networks when MAC randomization is enabled.

This type of MAC randomization is available for Android 12+ devices, and relies on the Android device either (1) re-randomizing the MAC address at the start of every connection (to the same SSIDs, etc.) or (2) uses the existing randomized MAC address to connect to a known network.

An Android device that is using this type of MAC randomization will re-randomize the MAC address in the following situations:

If none of these situations apply, the framework uses the previously randomized MAC address to connect to the network.

Depending on the duration of the DHCP lease, there is a possibility that the dashboard might report IP conflicts if an iOS 14 client switches its MAC but keeps the same IP address  (for example, immediately after the upgrade the client device is requesting the same IP address from a different MAC address). This behavior may trigger false-positives in a network for duplicate IP assignment.

Also, under certain circumstances, iOS 14 is sending a malformed ARP response that carries the HW MAC address instead of the Randomized MAC address it should instead be using.

Since Apple devices are now changing their MAC address and sending DHCP requests to obtain an IP address, MX (or MS L3 switches acting as a DHCP server) security appliances are offering new IP addresses based on new randomized MAC address because most Meraki assignments are done via MAC address. The MX devices must now account for two IP addresses for each iOS 14 device present in the network using the MAC randomization features per SSID in bridge mode. Below is a snapshot of the same client as it appears in the MX dashboard using the original MAC and randomized MAC. This may cause DHCP pool exhaustion issues. Lowering the DCHP lease time might mitigate this issue to some degree.

Loyalty and Engagement graphs will be impacted in a similar way but will stabilize over time.

We have also noticed that in some cases devices are not following the standard process of settings the locally administered bit correctly which is used for identifying randomized MAC address. A unique non-randomized MAC address needs to be detected for more than 1 minute interval for the client device to be classified as Passerby. If the device is using MAC randomization the MAC address used for probe requests changes multiple times within the 1 minute interval. Dashboard will be eliminating these MAC addresses from the Location Analytics computation and the Scanning APIv2 output as well. Meraki Health reports are based on MAC address. Because the MACs will be changed as the client changes SSID, it will be difficult to track if a client device has issues for connectivity or performance across the network or with only one specific SSID.

As iOS devices will report different MAC addresses for the client device, we will categorize this client as a new client in the dashboard. This may cause a sudden surge in the typical client count in any wireless network. This will be shown on the Network-wide > Clients page and in the Summary report.

Sentry Enrollment uses the device burned-in (real) MAC address (received directly from the device via MDM) to detect whether a device has been enrolled with SM when connecting to an MR. Because the device's randomized (private) MAC reported during association to the SSID will not match the burned-in (real) MAC address available to SM, Meraki is unable to detect the device as being already enrolled in MDM. This will cause the feature not to work as designed, as devices will be continuously asked to re-enroll upon association.

Steps You Can Take with Cisco Meraki to Minimize Impact

How to Use Systems Manager to Turn Off MAC Randomization