This article describes how to use the Packet capture tool in Dashboard to troubleshoot client-side DHCP issues on your network. This requires Wireshark installed in order to open PCAP file that will be downloaded from Dashboard. In this example, a client device is connected to a Cisco Meraki switch port but is unable to get IP information from the DHCP server.

The DHCP handshake is illustrated in Figure 1 below. 2. Set up your packet capture tool to gather data from the switch uplink port and the client on the same switch. You will need to set your packet capture tool to download file to PCAP file and capture for 60 seconds. If your DHCP server is connected to the same switch you will want to capture off the specific port the client is connected to instead of the uplink. 5. Open the saved PCAP file which has been downloaded from Dashboard with Wireshark and enter the bootp display filter, click Apply. This filter will show any part of the DHCP process in the capture:  DHCP discover, DHCP offer, DHCP request, DHCP acknowledge.This will give you great insight of where the DHCP process is potentially failing. The figure bellow shows the four-way DHCP process as well as the the Transaction ID which is very important as this groups each DHCP process/handshake together:

For the latter, please take a look at the following KB - Tracking down a rogue DHCP server

If you are not seeing a response back, here are some other things worth looking into:

Note: This Article can also be applied to other Cisco Meraki Devices

MX: Set Up your packet capture tool to capture off the LAN side of the MX 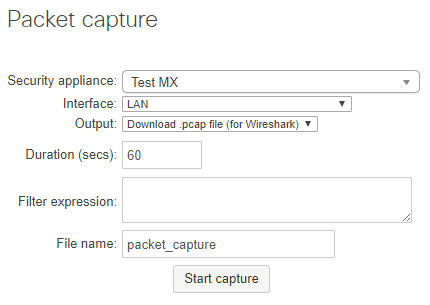 MR: There are two potential places to capture data: 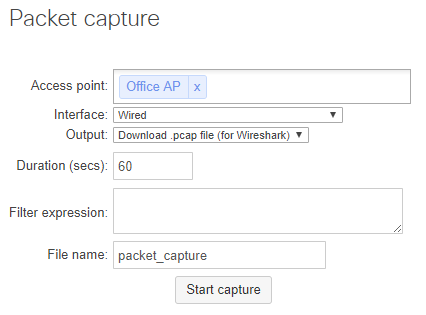