Wireless Client Isolation is a security feature that prevents wireless clients from communicating with one another. This feature is useful for guest and BYOD SSIDs adding a level of security to limit attacks and threats between devices connected to the wireless networks.  The below sections describe the feature in more detail.

Client Isolation is available for SSIDs configured for Bridge mode however is disabled by default. When a SSID is configured for bridge mode, clients are bridged through the Access Point potentially to a specific VLAN. Upon connection to the AP, clients will be permitted to make a DHCP request on the vlan they are assigned to. After DHCP is completed, the MAC address of the default gateway is tracked for the particular client. The MAC address of the default gateway is then permitted in a layer 2 firewall that restricts all other traffic to and from the wireless client. Since this feature relies on DHCP, clients with a statically assigned IP address connected to an SSID with Client Isolation enabled will not be able to pass meaningful traffic.

This feature is included within MR25.8 and later firmware versions.

Bonjour forwarding will not work for SSIDs with wireless client isolation enabled.

Client Isolation also extends to Port Profiles that can be leveraged on Access Points such as the MR30H, MR52, MR53 and MR84. More information on creating Port Profiles can be found here: https://documentation.meraki.com/MR/.../Port_Profiles The figure below shows that broadcast or unicast traffic sourced from the wireless client will not be sent to the other wireless clients on the SSID. 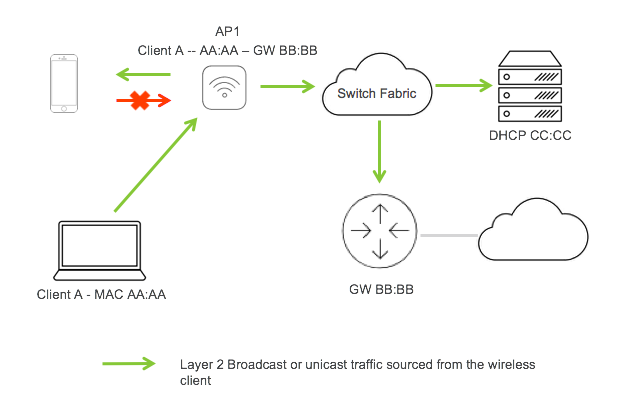 The figure below shows that DHCP traffic is allowed in addition to unicast and broadcast traffic with the gateway the client obtained though DHCP process.

DNS and DHCP are both allowed through the MR.

The figure below shows that broadcast or unicast traffic sourced from the wireless client will not be sent to the other wireless clients on the SSID. The figure below shows that broadcast or unicast traffic sourced from a wired client on the same VLAN as the client will be blocked by the Access Point. The implications of enabling NAT mode are as follows: