Automation Builder is a powerful tool purposefully built to provide a way to tie Dashboard actions to a click of the MT30 Smart Automation Button. This article is intended to walkthrough the setup of setting up a Dashboard Automation or an external automation via a Webhook Integration.

Currently Automations can only be assigned to an MT30 Smart Button. 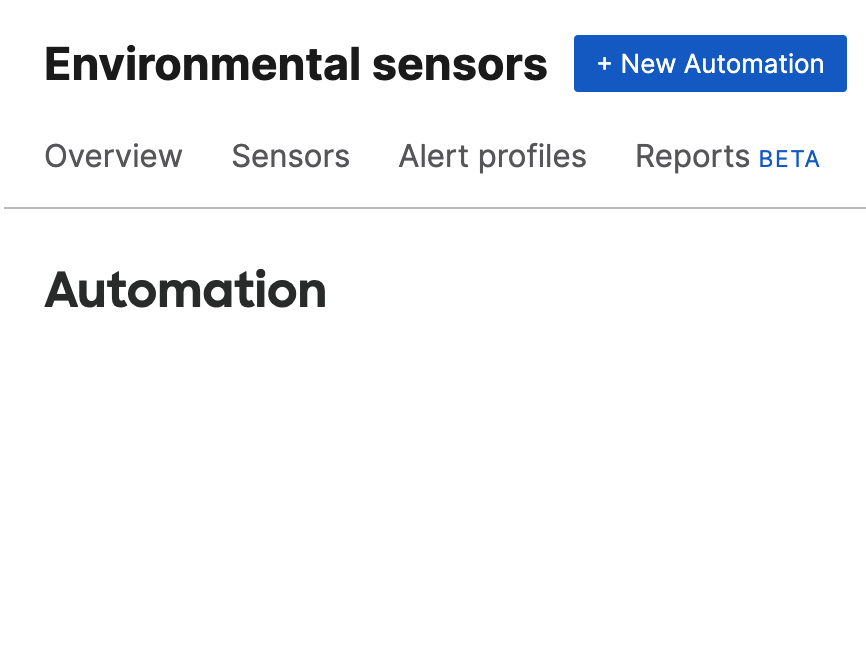 Once the New Automation option is selected, users are presented with a guided flow to create the automation

In the first step, users can give a name to the automation and also select an icon for quick reference. These icons are only for representation 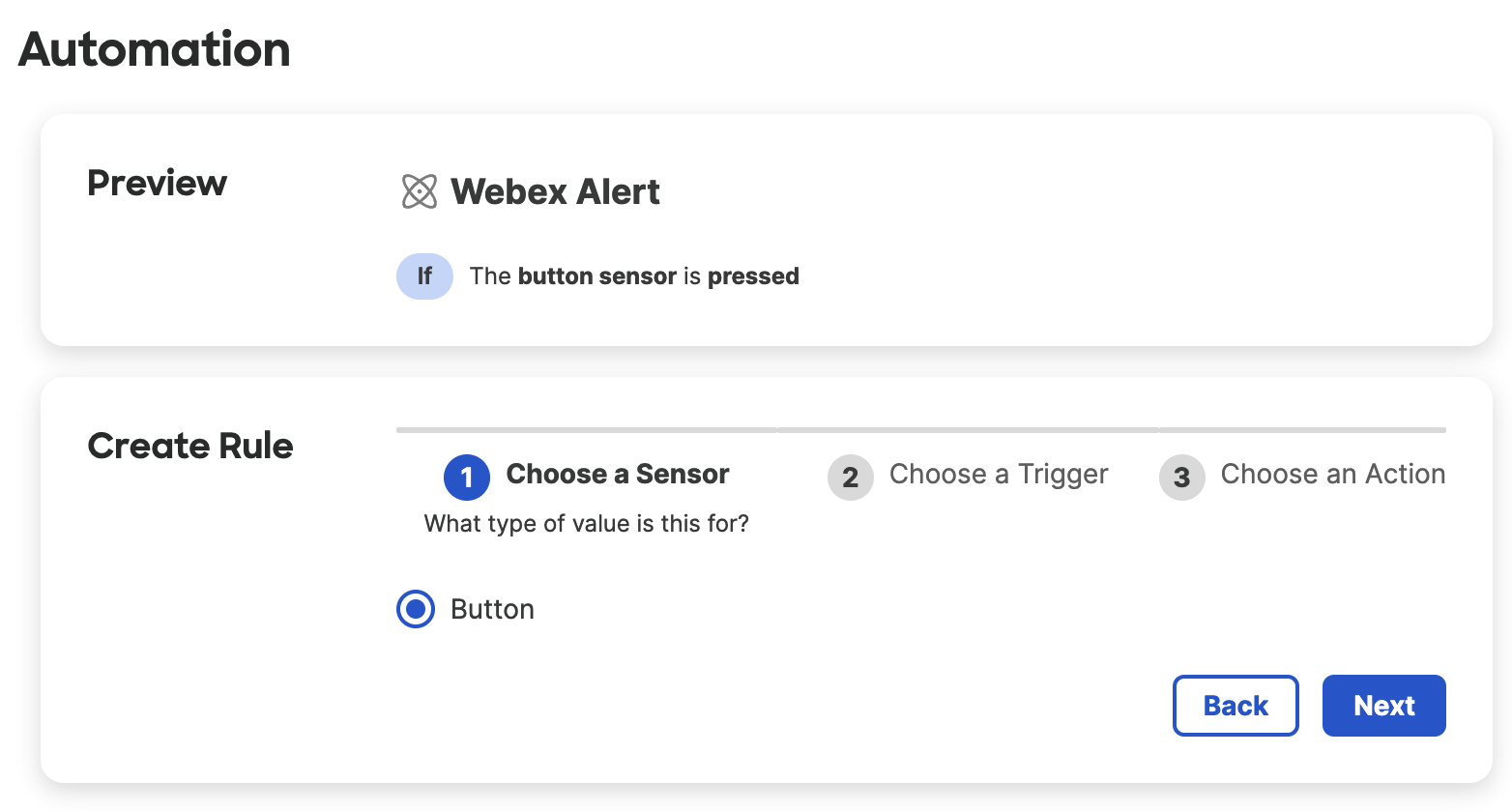 In the 1st sub-step, users can select which sensor should the Automation be monitoring. At the time, only the MT30 Button Sensor could be selected in this step. The list will be further expanded to other sensor types in the future. 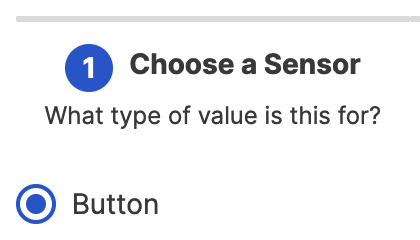 In the 2nd step, the type of reading can be selected to be used to trigger this Automation. In the case of MT30, the following triggers can be selected

In the last step, the Action needs to be selected. 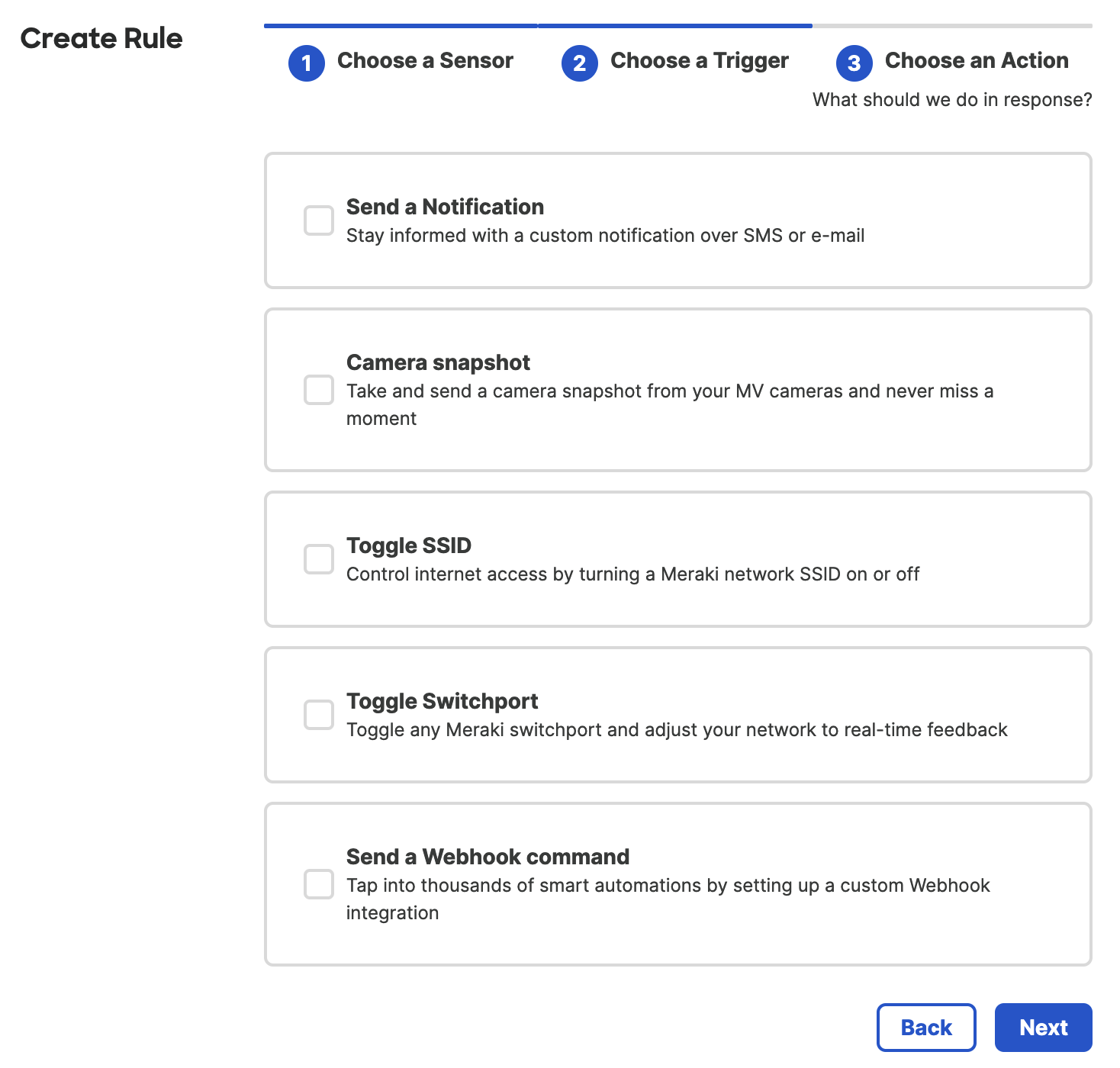 The Automation Builder has 5 different actions that can be enabled with a checkbox. This allows users to perform multiple actions with a single trigger. The Actions are as below: 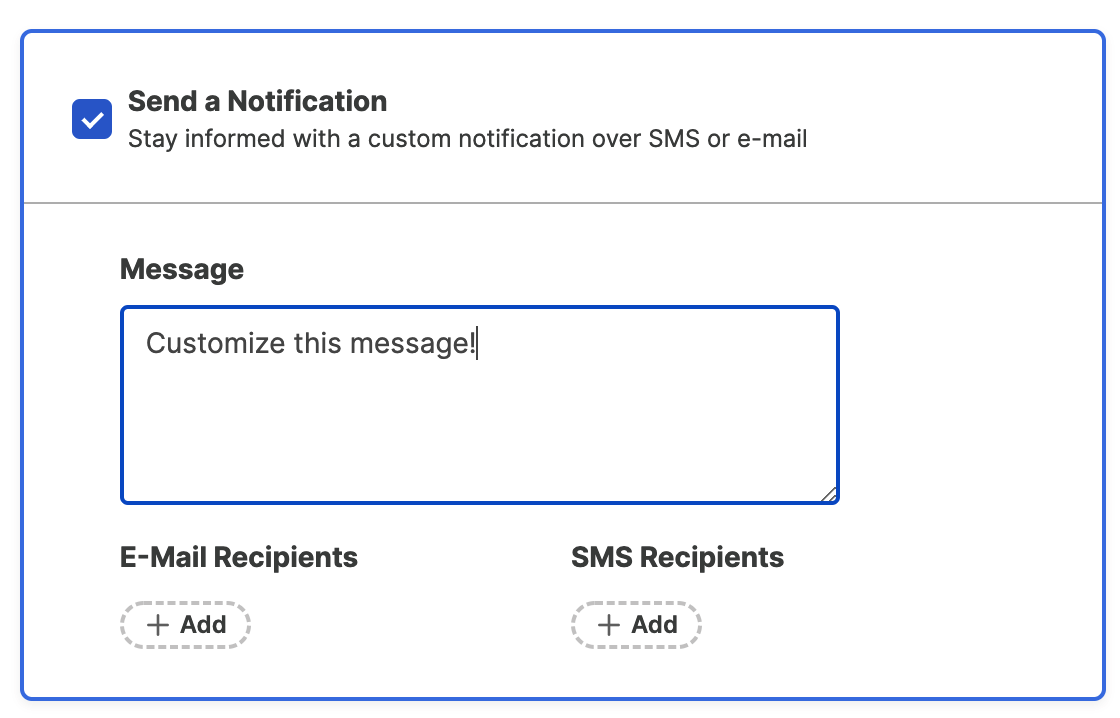 The Camera Snapshot action allows the user to configure up to 5 MV camera snapshots to be taken when the MT30 button is pressed. 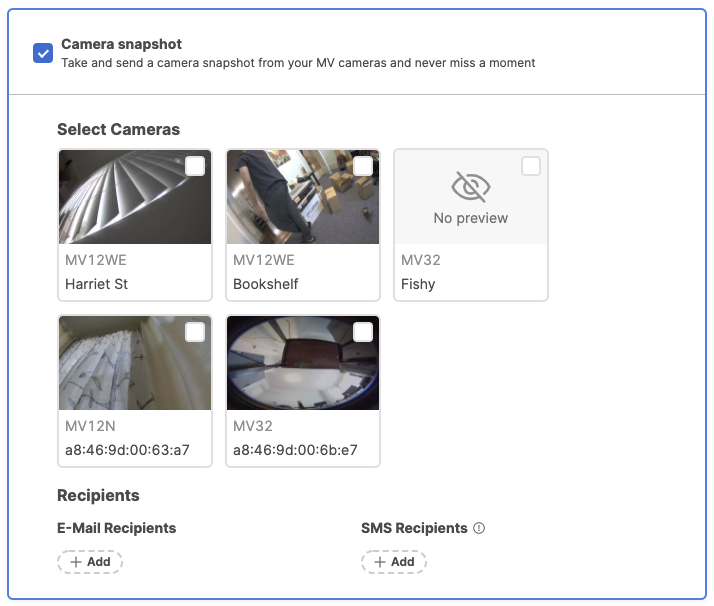 Once the MV cameras are selected, an Email Recipient or an SMS Recipient can be added.

Another Dashboard automation where a user can configure a specific SSID in the same Wireless Network to be toggled when a button is triggered. 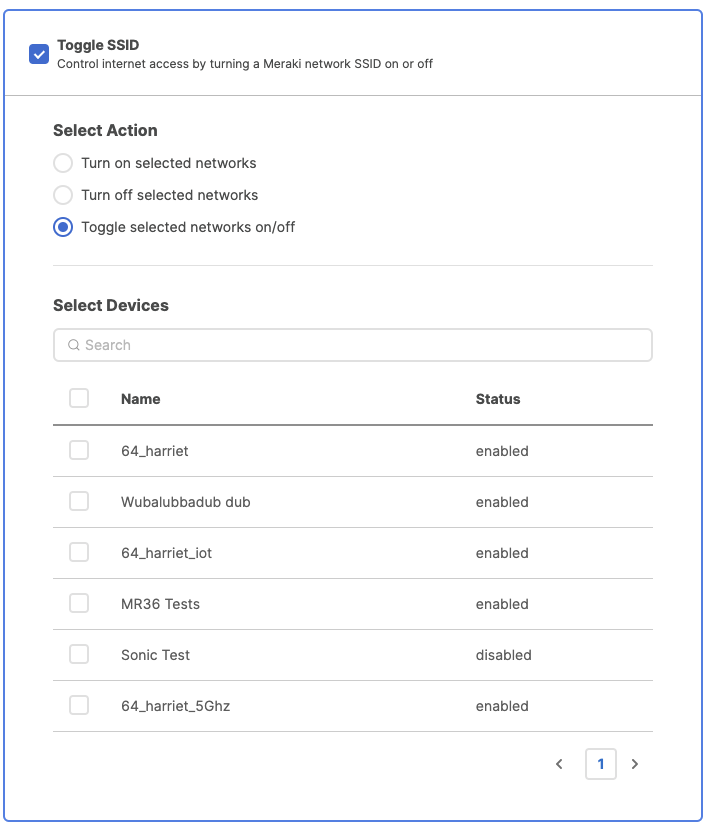 In this action, users can select which SSID they want to toggle/turn on/turn off.

Only SSIDs in the same network as the MT30 can be selected as an action.

Using this action, a user can configure a specific MS switchport to be toggled/turn on/turn off a specific or a group of switchport triggered by a button press 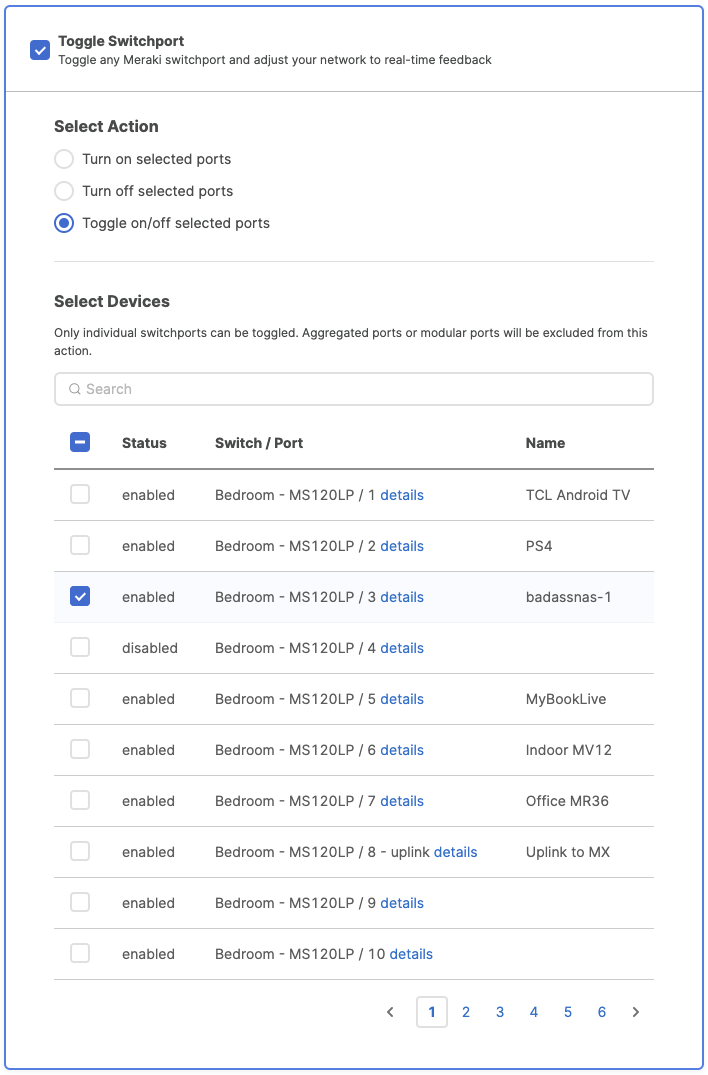 Last but not the least, a Webhook action can also be added to the automation. In this action, users can configure a custom message to be included in the outbound Webhook payload. 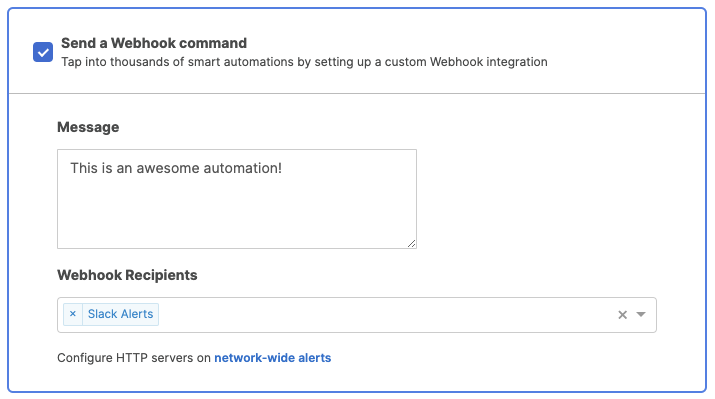 The Webhook servers need to be configured under Network-wide>Alerts and only then will they show up in the list.

Once the Automation rule is set up with the trigger and the action, the guided flow will allow users to assign a device to the automation. The list will only show MT30s in the network at the moment.