This document encompasses a detailed overview of failover behavior between high availability VPN concentrators operating BGP. A reference architecture will be provided along with details on the protocols involved (TCP, BGP, VRRP). Additionally, expected behavior will be discussed and what this means for the headend WAN architecture.

In a Normal state, we have two VPN concentrators participating in the Virtual Router Redundancy Protocol (VRRP). The primary (active) being on the right with the spare (passive) on the left. EBGP sessions are bound to the shared virtual IP. (In this scenario 192.168.1.5.) For more in-depth information regarding the VRRP mechanism on the MX, please see the HA Failover Behavior documentation.

During failover,  VRRP enables the spare VPN concentrator to assume the role of the active and establishes EBGP sessions bound to the virtual uplink IP, further sending and receiving all BGP messages (Updates, Notifications, etc.) 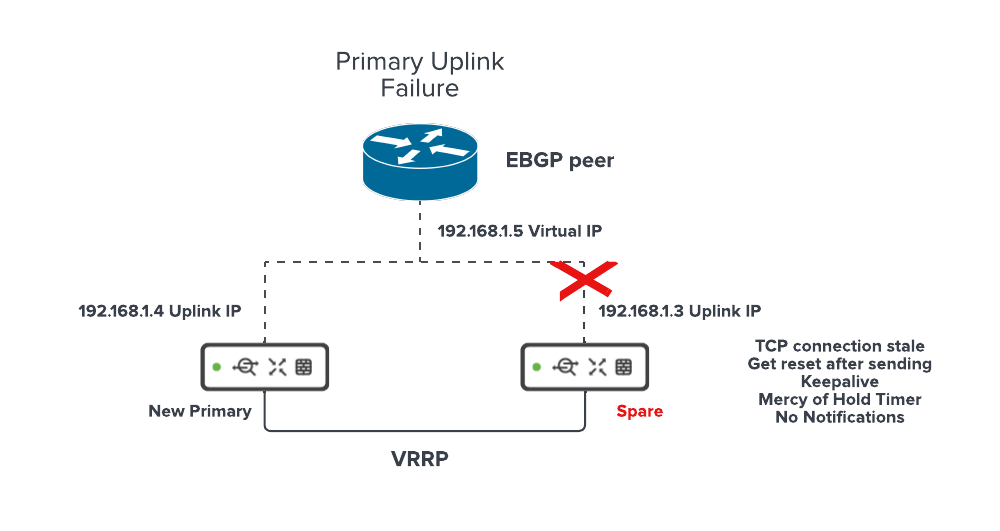 Below is a diagram illustrating BGP convergence occurring during the failover scenario:

In the above diagram, a branch site removes a local route from being advertised in BGP; generating a BGP Update message withdrawing the 192.168.100.0/24 prefix from the route table for the spare (which is the current active). However, since the current active has its primary uplink down, no IBGP messages are received on the device's control plane. Thereby, resulting in the stale route still being present in the route table during failover.

In the above diagram, the datacenter edge router removes an IBGP learned route from its RIB. The EBGP peer generates a BGP Update message withdrawing the 10.10.10.0/24 prefix. The route table for the spare (which is the current active) is updated. However, since the current active has its primary uplink down, no EBGP messages are received on the device's control plane. Thereby, resulting in the stale route still being present in the route table during failover. The below diagram illustrates the message exchange between the Active and upstream EBGP peer:

The below diagram illustrates the message exchange when the primary uplink recovers: The re-establishment of the BGP session causes the primary MX at the headend to purge all BGP connections for which it received a TCP RST on. (This includes IBGP and EBGP connections.) During this time of reconvergence, branch traffic will redirect flows to its backup DC.

The Cisco Meraki high availability solution described in this document provides secure, reliable and scalable datacenter redundancy. This allows for the most efficient use of resources between datacenters and respective branch offices. Additionally, this document encompassed a detailed step-by-step overview when incorporating Auto VPN with BGP in your WAN architecture.