This page describes how to set up a High Availability (HA) pair using the VRRP protocol between two MX Security Appliances in either one-arm Concentrator mode or Routed mode, as well as the expected behavior of configured HA pairs. High availability can be used to minimize downtime in the event of a hardware failure.

Only one license is required for an HA pair. The warm spare unit does not require a separate license. Alerts for Warm spare failover can be configured on the Alerts and Administration page.

Note: The secondary MX must be the same MX model as the primary. Warm spare functionality is not supported between different MX models (e.g. MX80 & MX100). 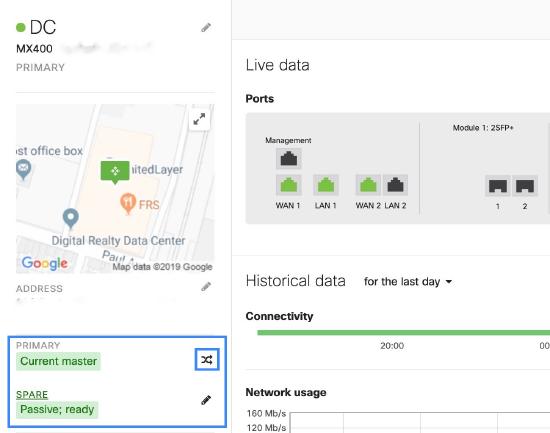 The swap button is used to change the primary and spare roles between the two MXs and is not meant to test HA failover. For a failover test, complete disconnection of uplink to the primary MX is required.

In most customer deployments, network downtime has a direct impact on the business and should be avoided at all costs. Warm Spare functionality prevents the network from having a single point of failure at the edge and allows for fast, automatic recovery in the event of device failure, reducing the negative impact on end-user services.

For purposes of this document, it is important to understand the following terms and their meaning:

Primary: The MX that is configured as the "main" MX for the network. If both MXs are online, this is the MX that traffic should be flowing through. This is a static designation, meaning that regardless of the current state of the network the Primary will always be the Primary.

Spare: The MX that is configured as the "secondary" MX for the network. If both MXs are online, this is the MX that is the inactive warm spare. This is a static designation, meaning that regardless of the current state of the network the Secondary will always be the Secondary.

Active: The MX that is currently acting as the edge firewall/security appliance for the network. This is a dynamic designation.

Passive: The MX that is currently acting as an inactive warm spare with no traffic passing through it. This is a dynamic designation.

Dual Active: Dual Active describes a scenario in which both the Primary and the Spare are in the Active state. This occurs when both MXs are online and communicating with the cloud, but the Secondary is not receiving heartbeat packets (see VRRP heartbeats in the next section) from the Primary. This can cause several issues with Dynamic DNS, VPN, and traffic processing in general and should be avoided at all costs. The Physical Architectures section of this document describes how to deploy an MX Warm Spare pair in order to minimize the chances of a Dual Active scenario occurring.

For more in-depth information regarding the VRRP Mechanics on the MX, please see the Routed HA Failover Behavior documentation.

Connection monitor is an uplink monitoring engine built into every MX Security Appliance. The mechanics of the engine are described in this article. When all uplinks of a Primary MX are marked as failed by connection monitor, that MX will stop sending VRRP heartbeat packets, which will initiate a Warm Spare failover. Once at least one uplink on the Primary returns to a working state, the Primary resumes sending heartbeat packets and the Secondary relinquishes the Active role back to the Primary. More information can be found on Connection Monitor documentation.

To configure warm spare failover for an existing Dashboard network, navigate to the Security & SD-WAN > Monitor > Appliance status, and select Configure warm spare near the upper-left side of the page, below the device name. In the window that appears, select Enabled. Enter the serial number of the Secondary MX and select the desired Uplink IP configuration, then select Update to enable Warm Spare.

Use MX uplink IPs: When using this option, the current Active MX will use its distinct uplink IP or IPs when sending traffic out to the Internet. This option does not require additional public IPs for Internet-facing MXs, but also results in more disruptive failover because the source IP of outbound flows will change.

Use virtual uplink IPs: When using this option, both MXs will use a shared virtual IP (VIP) when sending traffic out to the Internet. This option requires an additional public IP per uplink but allows for seamless failover because the IP address the network is using to communicate with the Internet will be consistent. The VIP for each uplink must be in the same subnet as the IPs of the MXs themselves for that uplink, and the VIP must be different from both MX uplink IPs.

To configure a new network with warm spare failover, create the network as you would normally and add the Primary MX. Then add the Secondary MX using the process described above.

Regardless of which option is selected, both MX devices will need their own uplink IP addresses for Dashboard connectivity.

Dashboard configuration should always be performed before the Secondary MX is physically connected to the network.

Note that when an MX is added to a network that already contains an MX of the same model from the Organization > Inventory page, the MX will automatically be added to that network in warm spare mode.

MX devices can be configured in a warm spare, high-availability pair using one of two MX addressing options:

Note that while the mode is reflected in Dashboard as a VPN Concentrator/Passthrough Mode the MX only supports a One-Armed concentrator topology for this mode. Additional information regarding this can be found in the Connecting the MXs in a “One-Armed” VPN Concentrator Pair section.

Each mode will result in having two MXs on the same network, with a primary able to failover to a secondary. However, each mode requires a slightly different configuration. The different configuration methods and considerations are detailed here. If you need more information about the MX addressing modes, or how to select which one is best for your deployment, refer to our MX Addressing and VLANs article.

Each concentrator has its own IP address to exchange management traffic with the Meraki Cloud Controller. However, the concentrators also share a virtual IP address that is used for non-management communication.

Connecting the MXs in a “One-Armed” VPN Concentrator Pair

Before deploying MXs as one-arm VPN concentrators, place them into Passthrough or VPN Concentrator mode on the Addressing and VLANs page. In one-armed VPN concentrator mode, the units in the pair are connected to the network only via their respective Internet ports. Make sure they are not connected directly via their LAN ports. They must be within the same IP subnet and able to communicate with each other, as well as with the Cisco Meraki Dashboard. Only VPN traffic is routed to the MX, and both ingress and egress packets are sent through the same interface.

The virtual IP address (VIP) is shared by both the primary and warm spare VPN concentrator. VPN traffic is sent to the VIP rather than the physical IP addresses of the individual concentrators. The virtual IP is configured by navigating to Security & SD-WAN > Monitor > Appliance status when a warm spare is configured. It must be in the same subnet as the IP addresses of both appliances, and it must be unique. In particular, it cannot be the same as either the primary or warm spare's IP address.

The two concentrators share health information over the network via the VRRP protocol.

The total time for failure detection, failover to the warm spare concentrator, and ability to start processing VPN packets is typically less than 30 seconds.

Router Warm Spare is used to provide redundancy for internet connectivity and appliance services when an MX Security Appliance is being used as a Routed gateway.

Virtual IP addresses (VIPs) are shared by both the primary and warm spare appliance. Inbound and outbound traffic uses this address to maintain the same IP address during a failover and reduce disruption. The virtual IPs are configured on the Security & SD-WAN > Monitor > Appliance status page, under the SPARE section in the upper-left corner of the page. If two uplinks are configured, a VIP can be configured for each uplink. Each VIP must be in the same subnet as the IP addresses of both appliances for the uplink it is configured for, and it must be unique. In particular, it cannot be the same as either the primary or warm spare's IP address. LAN IP addresses are configured based on the Appliance IPs in any configured VLANs. No virtual IPs are required on the LAN.

WAN Failover: WAN monitoring is performed using the same internet connectivity tests that are used for uplink failover. For more data on these checks, see the Cisco Meraki Knowledge Base. If the primary appliance does not have a valid internet connection based on these tests, it will stop sending VRRP heartbeats which will result in a failover. When uplink connectivity on the original primary appliance is restored and the warm spare begins receiving VRRP heartbeats again, it will relinquish the active role back to the primary appliance.

LAN Failover: The two appliances share health information over the network via the VRRP protocol. These VRRP heartbeats occur at layer 2 and are performed on all configured VLANs. If no advertisements reach the spare on any VLAN, it will trigger a failover. When the warm spare begins receiving VRRP heartbeats again, it will relinquish the active role back to the primary appliance.

The MXs in a Routed mode high availability pair exchange DHCP state information over the LAN on UDP port 3483. This prevents a DHCP IP address from being handed out to a client after a failover if it has already been assigned to another client prior to the failover.

When configuring Routed HA, it is critical that both MXs have a reliable connection to each other on the LAN, so the Primary MX's VRRP heartbeats can be seen reliably by the Spare. To ensure this connection is reliable:

Additionally, the following other considerations should be kept in mind:

Meraki does not currently support any cellular failover with a high availability (HA) pair; as we do not perform connection monitoring on cellular uplinks (as of MX 10.X+), which is necessary for HA uplink failover. At this time, if a cellular uplink is used in an HA pair, the following will occur in order:

While it is possible to use cellular failover as described above, it is not officially supported by Meraki.

In this architecture, the Primary and Secondary MXs are not directly connected, and VRRP Heartbeats are carried between the downstream switches. This is the recommended architecture for most deployments, as there is no single point of failure in this topology. In this architecture, the Primary and Secondary MXs are connected via a downstream switch stack. Each switch has at least one uplink to each MX. This ensures that there is no single point of failure in the topology. If there is a problem with the Routed HA configuration, there may be various symptoms that will affect the network, and it may not be obvious that the root cause is Routed HA. This section outlines what issues with HA typically look like, as well as recommended troubleshooting steps.

The most common sign of a problem with Routed HA is a Dual Activeter scenario, where both the Primary and Spare MX report in Dashboard as being Active. This can be observed in Dashboard under Security & SD-WAN > Monitor > Appliance status and comparing the current state of each appliance.

This will occur if the Primary MX is online and sending heartbeats that aren't seen by the Spare, resulting in the Spare thinking that the Primary is down. If both the Primary and Spare are in the active state, this will cause various issues with the network, affecting DHCP, routing, VPN, etc.

If network issues are occurring that appear to be related to Routed HA, the following troubleshooting steps should be taken to identify the root cause: