The default configuration on most enterprise switches will work out-of-box as vendors tend to use a default switch port config of "trunk all, with native vlan 1". It is important to note that if connecting a Meraki MS switch to another vendor's switch, the other end of the link must be identically configured. If this is not the case, the link may not operate as expected due to VLAN or Native VLAN mismatch. Common misconfigurations include:

In this example, the PC user will not be able to reach the server on the left-hand side as the traffic being sent by the Meraki switch with a VLAN ID of 20 will not be accepted by its peer since it has not been configured to allow such traffic. 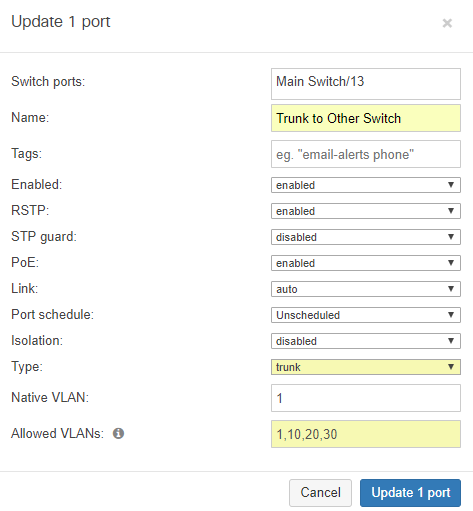 The following configuration examples outline how a non-Meraki peer switch's trunk link should be configured, to best operate with the example above.

Since Cisco Meraki VLAN tagging operates on the 802.1q tagging standard, any standard-compliant switch can be configured to operate in tandem with an MS switch. The best practice/examples outlined above should be used as a reference. For vendor-specific recommendations, refer to your switch vendor's documentation for 802.1q tagging and trunking.