Cisco Meraki MS switches offer the ability to configure access policies, which require connecting devices to authenticate against a RADIUS server before they are granted network access. These access policies are typically applied to ports on access-layer switches, to prevent unauthorized devices from connecting to the network.

This article outlines what options are available for access policies, how to configure access policies in Dashboard, and configuration requirements for RADIUS servers.

Support for all host modes is available from firmware version MS 10.12.

There are four authentication host modes to choose from: NOTE: UDP/1700 is the default port used by all MS for CoA

This feature is available in public preview/beta in dashboard as of Aug 2022 beginning in MS 15 for classic switches. The toggle will only appear on networks running MS 15 or later. Support is not available on MS390 switches as of MS 15, but is anticipated to be added in an upcoming release.

Interoperability and backward-compatibility in VLAN assignments

1 When using hybrid authentication without increase access speed (concurrent-auth), a client failing both 802.1X and MAB authentication will also be placed in the Guest VLAN. Please refer to the Access Policy Types section of the MS Switch Access Policies documentation for details.

MS 14 is the minium firmware version required for the following configuration options.

When an access policy is configured with RADIUS server, authentication is performed using PAP. The following attributes are present in the Access-Request messages sent from MS switch to the RADIUS server.

Note: Please refer to RFC 2865  and RFC 3579 for details on these attributes, additional notes for certain attributes are included below. 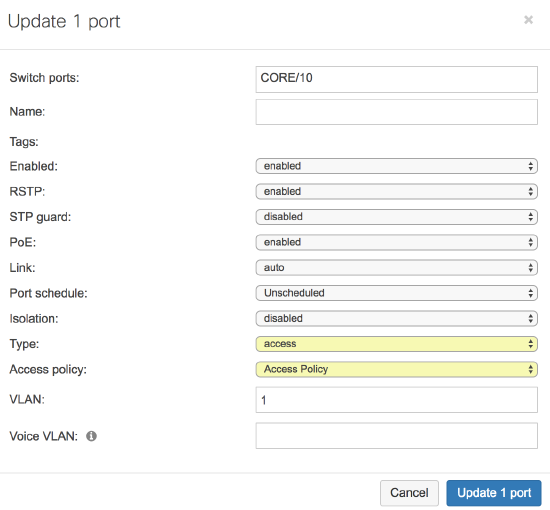 Unmanaged Switches Between MS and Client for RADIUS Authentication

When using PEAP EAP-MSCHAPv2 on an MS switchport, if an unmanaged switch is between the supplicant (user machine) and the RADIUS client (MS) the authentication will fail. The reasoning is explained below:

There is a work-around to this but special considerations must be taking before implementing them: