Note: Some Azure regions such as South Africa West require Azure support to enable the ability to deploy the Standard F4s_v2 VM instance type required by the Meraki vMX. The process for requesting access to these regions is documented by Microsoft in the Azure region access request process.  Meraki vMX is only supported on instance types mentioned in this KB, other instance types are not supported.

Before deploying a vMX, it is important to understand several key concepts.

All MXs can be configured in either NAT or VPN concentrator mode. There are important considerations for both modes. If needed, refer to the article on concentrator modes for more detailed information.

In this mode, the MX is configured with a single Ethernet connection to the upstream network. All traffic will be sent and received on this interface. This is the only supported configuration for MX appliances serving as VPN termination points into Azure Cloud.

Note: A limited NAT mode capability can be enabled on the vMX in which traffic from the spokes will be NATed to the vMX's IP as it egresses the vMX in to your datacenter.  Other capabilities of the NAT mode including DHCP, HA or multiple ports (LAN and WAN) are not supported.  In each mode the vMX is still a one-armed appliance with one network interface

There are several options available for the structure of the VPN deployment.

In this configuration, branches will only send traffic across the VPN if it is destined for a specific subnet that is being advertised by another MX in the same dashboard organization. The remaining traffic will be checked against other available routes, such as static LAN and third-party VPN routes, and if not matched will be NATed and sent out the branch MX unencrypted.

In full-tunnel mode, all traffic that the branch or remote office does not have another route to is sent to a VPN hub.

This document will make reference to several key Azure-specific terms and concepts.

A virtual network is where a block of associated IP addresses, DNS settings, security policies, and route tables can be configured and managed.

Azure has different types of virtual network environments, which represent two different methods of deploying and managing Azure virtual environments. The vMX uses managed applications, which is a Microsoft platform, and is not compatible with Azure 'classic' deployments.

A resource group is a container within Microsoft Azure's infrastructure where resources such as virtual machines are stored.

Managed applications within Azure serve as the network used to manage and support the Cisco Meraki vMX.

During the setup of your vMX instance, or over the course of working within Azure, you may encounter additional terminology which is not defined in this document. To find out more about these terms, and for additional details on the terms listed above, please see the Microsoft Azure glossary.

1. Adding license(s) to the Meraki dashboard

The Meraki Dashboard will require a vMX license to be added before you are able to continue. If you do not have access to a vMX license, please reach out to your Meraki reseller or sales rep. Once you have created the "Security appliance" network and added the appropriate license, you will be able to deploy a new vMX to your network by clicking on the 'Add vMX' button: 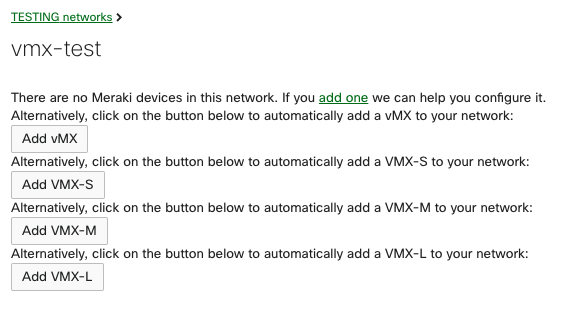 Before generating the token, please verify the firmware is running MX 15.37+, otherwise the upgrade will not occur.

After you add the new vMX to your network, navigate to Security Appliance > Appliance status and select “Generate authentication token” to generate the token for the Azure "Meraki Authentication Token" data field. 3. Copy the newly generated token and save it.

The newly generated token will be used in the Basics -> Instance details section when creating a new Azure-managed application.

The authentication token must be entered into the Azure instance within one hour of generating it, otherwise a new token must be generated.

You must have the following before you begin:

A NOTE FROM AZURE:

This section walks you through configuring the necessary requirements within Microsoft Azure, and adding a vMX instance to your resource group. For more details on setting up a resource group and other components, please refer to Azure's documentation.

Access to the vMX offer. A screenshot of the Marketplace list of Cisco Meraki vMX in Azure is included below: After creating, you will be prompted to configure basic settings for the managed app. 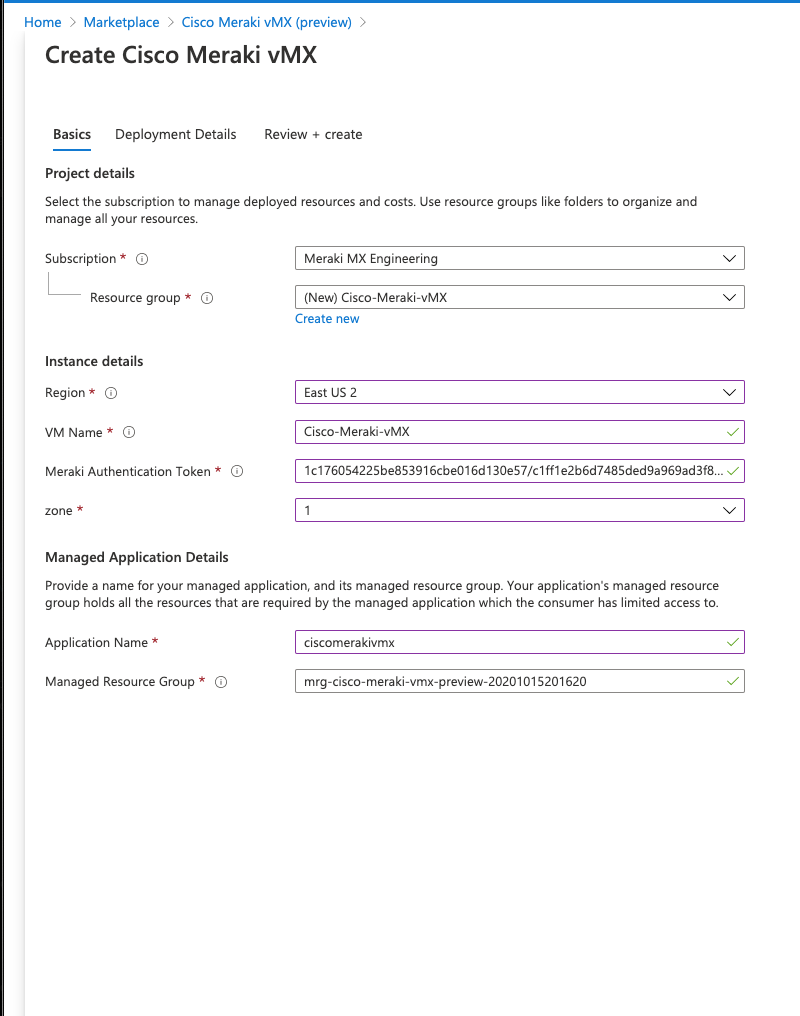 Not all regions on Azure support Availability Zones (AZ). Select “NONE” for zones that don’t support AZs. If a zone is selected for a region that does not support AZs, the deployment will fail.

After completing the basic settings configuration, go to the next step, “Deployment Details.”

vMX-L is currently not supported on Azure.

Next, review the deployment details and licensing information and hit "Create." 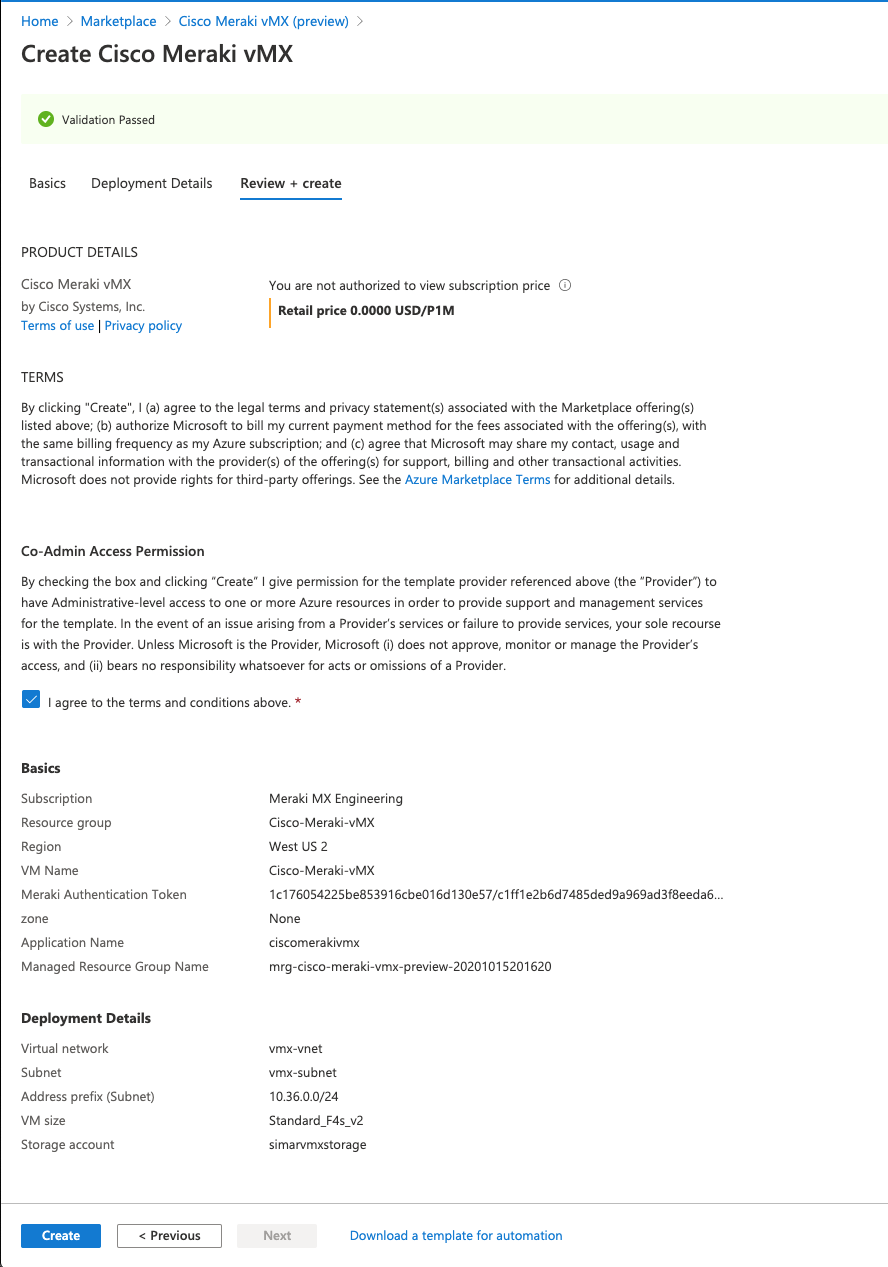 After you click on "Create," the deployment will begin.

It may be several minutes before the deployment completes and the instance launches.

Once the vMX is online, a route table needs to be created including the Auto VPN subnets so that the Azure resources know how to access the Meraki subnets over Auto VPN.

To create a route table, click on "New" and then "Route Table."

Next, define the “Basics” for the new route table resource. 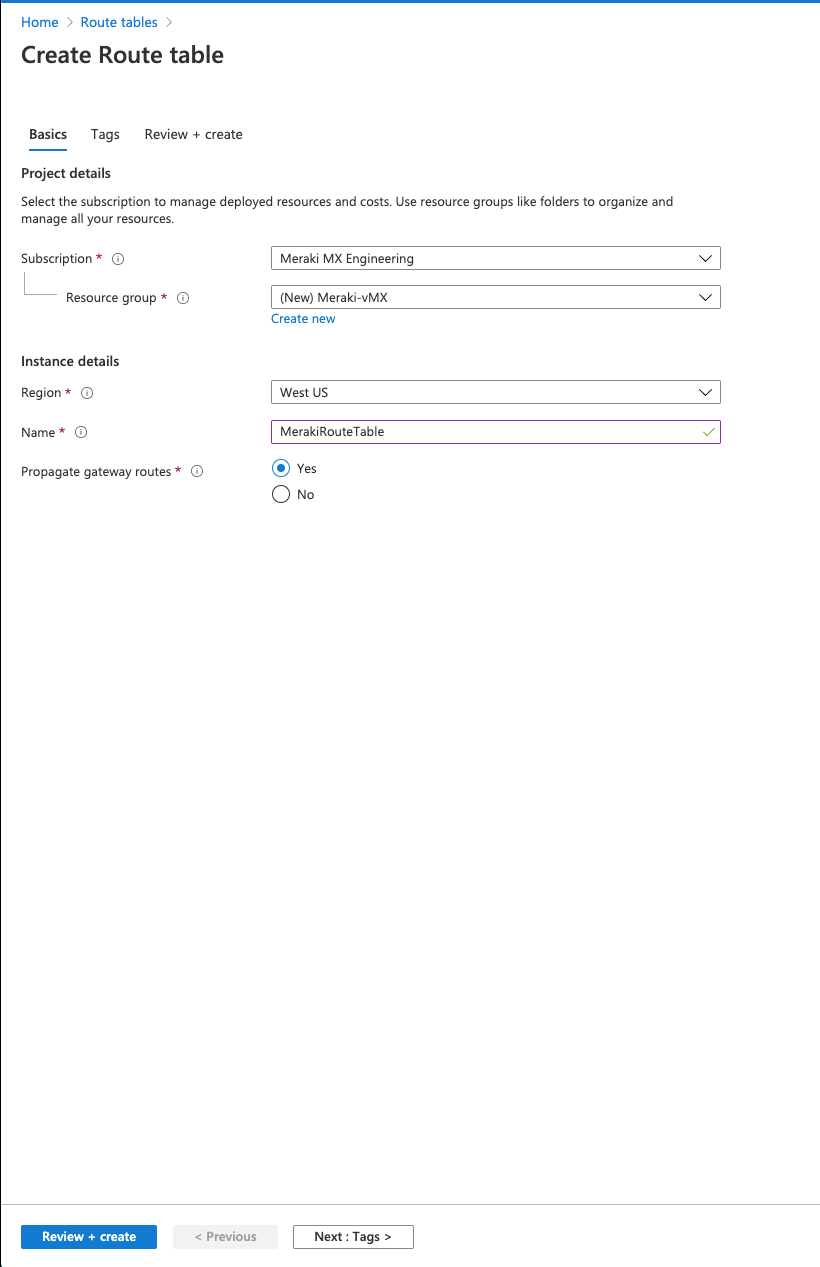 Once the Route Table has been created, add the VPN routes pointing to the vMX as the next hop, including the client VPN subnet where applicable: 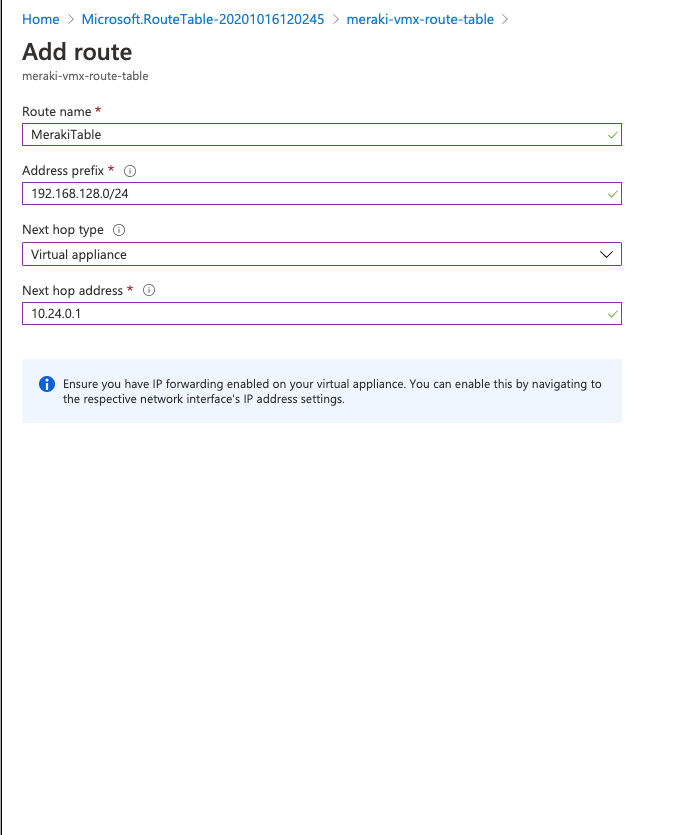 Please ignore the IP forwarding warning, it has already been enabled in the managed application template by default. 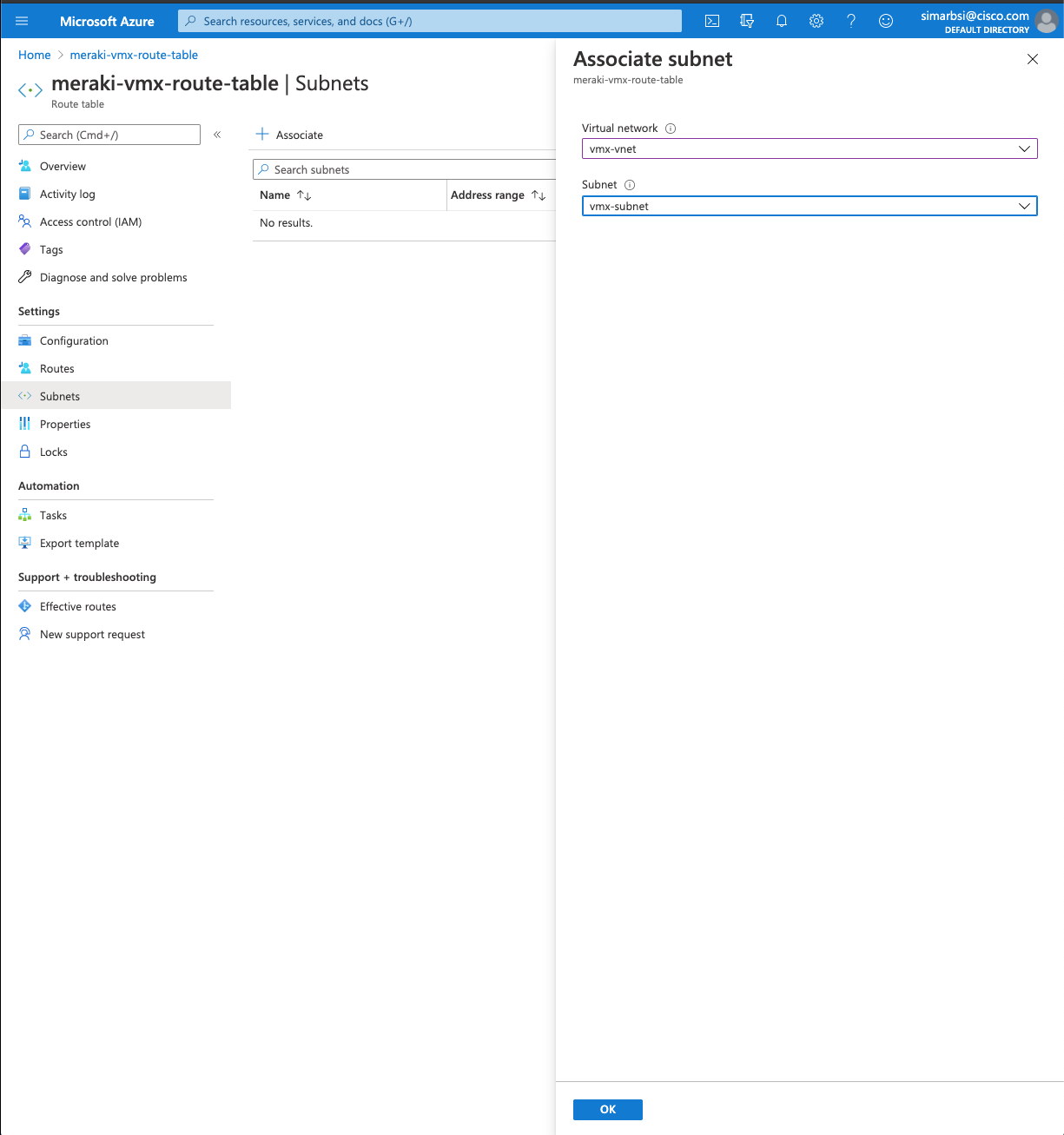 Once the subnet has been associated, enable site-to-site VPN on dashboard.

The most common problem when deploying a vMX is getting it provisioned and online in the Meraki dashboard in the first place.  New troubleshooting/diagnosis messages have been added to the vMX console screen so you can identify what went wrong during the provisioning process.

When the vMX boots it will execute the following steps during its initial provisioning process:

Once a vMX has successfully connected to a network, it will then attempt to obtain its user data (vMX auth token). There are different user-data mechanisms in each platform that the vMX currently runs on to provide the token to the vMX. In AWS, Azure, GCP, and Alicloud there are user-data fields in the VM configuration where this can be provided.

vMX auth tokens have a lifetime of only one hour for security purposes. If you see the following message on your vMX console it means the token you provided is no longer valid.

If the token provided is incorrect in any way the "invalid token" message is displayed on the console.

If the vMX is unable to reach the dashboard on TCP port 7734, the initial provisioning phase will fail and an "Unable to reach Meraki Dashboard" message will be displayed on the console (check the firewall information page for a list of all the firewall rules needed for the Cisco Meraki cloud communication). Please refer to this document on the correct ports/IPs that need to be opened for Meraki dashboard communication.

When navigating to Security & SD-WAN > Appliance Status, if there is no "Add vMX" button, please ensure the following two conditions are met: